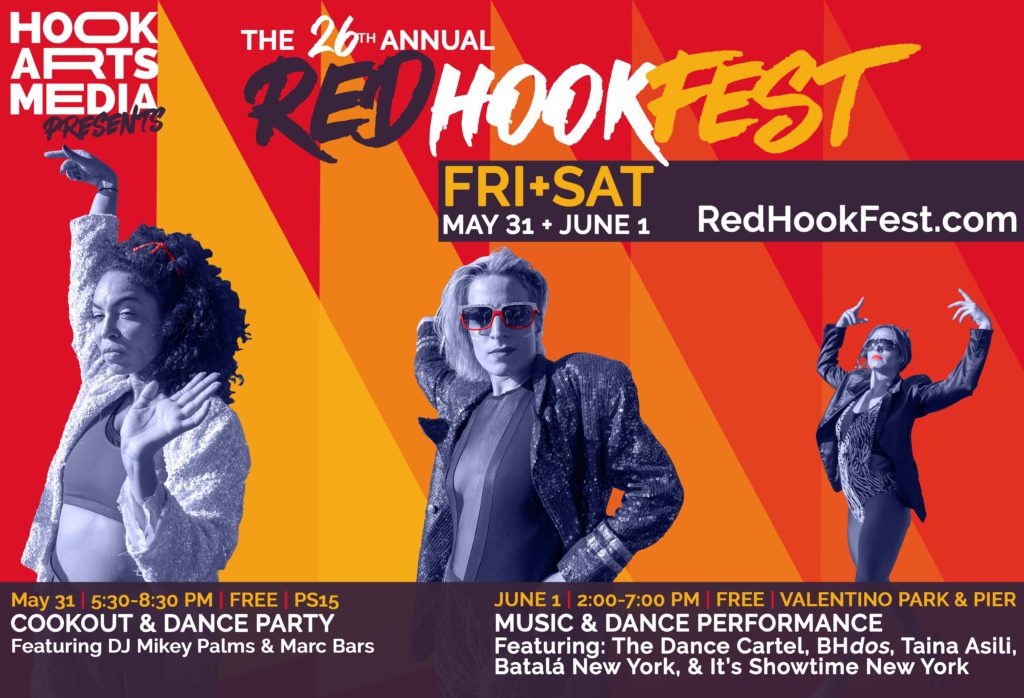 One of Brooklyn’s most fun and enduring annual events, Red Hook Fest brings concert-quality performers to our scenic neighborhood for a weekend of fun. With a free community cookout, DJ-led dance party, and NYC’s top musicians and bands, Red Hook Fest delivers 2 days of summertime fun for everyone.

Hook Arts Media® is happy to announce that The 26th Annual Red Hook Fest, the FREE live music and dance festival on the Brooklyn waterfront, will return May 31-June 1, 2019! On Friday, May 31, the festival will open at 5:30 PM at PS15 in Red Hook, Brooklyn, NYC. The first day of the festival will feature a free barbecue and DJ-led dance party with special performances from pre-professional youth groups led by Rajonna Lewis.

On Saturday, June 1, the festival will continue at Red Hook’s scenic Valentino Park and Pier, which features stunning views of Downtown Manhattan and The Statue of Liberty. Free family-friendly activities will include kayaking in the harbor, face-painting, t-shirt decorating, in addition to interactive activities from the stage. Our mainstage lineup includes some of NYC’s top performers, including:

The Dance Cartel’s popular fusion of stunning choreography, multimedia, and a lively party environment has been exhilarating NYC audiences for years. Noted for their unique ability to get everyone in the room on their feet, The Dance Cartel’s performances were described as “…practically designed to make believers — and dancers — out of everyone in the standing-room-only audience.” by Flavorpill. The Dance Cartel has been celebrated in The New York Times, TimeOut Magazine, The Huffington Post, and on late night television by Conan O’Brien and James Corden. Hook Arts Media eagerly anticipates the energy they’ll bring to the 2019 Red Hook Fest.

Ballet Hispanico’s Second Company BHdos will be performing on the Red Hook Fest mainstage on Saturday, June 1, 2019. BHdos will present Performances for Young People, which take audiences on a guided journey through Latin-American dance and music. This interactive, fun-filled exploration features excerpts of the Ballet Hispánico repertory and is narrated by a member of Ballet Hispánico’s artistic team. Ballet Hispánico, America’s leading Latino dance organization in the United States, has been bringing individuals and communities together to celebrate and explore Latino cultures through dance for nearly 50 years. Whether dancing on stage, in school, or in the street, Ballet Hispánico creates a space where few institutions are breaking ground.

Taina Asili joins the festival lineup after performing during the 2017 Women’s March on Washington D.C. and premiering her music video, “No Es Mi Presidente (Not My President)” on RollingStone.com. A celebrated singer-activist, Asili has been listed amongst “12 Freedom Fighting Bands To Get You Through the Trump Years” and “11 Songs of Protest & Resistance by Latino Artists” by The Huffington Post and Billboard Magazine, respectively. She has shared the stage with celebrated artists, such as Alicia Keys, Talib Kweli, and Janelle Monáe, and Hook Arts Media is very excited to have her join the 2019 lineup.

It’s Showtime NYC  joins the festival lineup following a successful and inspired performance at The Metropolitan Museum of Art, called “Battle Hip Hop in Armor.” A project of Dancing in the Streets, It’s Showtime NYC celebrates NYC street culture and provides performance and professional development opportunities to street and subway dancers. From NYC to Paris to Rio de Janiero, It’s Showtime NYC has worked with celebrated dancers and choreographers including Anne Nguyen and Faustin Linyekula and has been praised in The New Yorker and New York Times.

Batalá New York is an all-female percussion ensemble playing Afro-Brazilian music, primarily Samba Reggae, a genre originating in the state of Bahia in northeast Brazil. As its name suggests, Samba Reggae is world music that incorporates Brazilian samba and Caribbean reggae. Like Samba Afro and Axe, Samba Reggae incorporates African rhythms preserved and honored through Afro-Brazilian religions such as Candomblé. All 3 genres have influenced Batala’s repertoire. Some notable Afro-Brazilian bands include Ilê Aiyê, Timbalada, and Olodum, who became widely known outside Brazil following collaborations with Michael Jackson and Paul Simon. During Carnaval every year, samba reggae is performed in the streets of Salvador, the capital of Bahia, by musical blocos with percussion sections numbering in the hundreds of drummers moving together.  In homage to that tradition, Batalá New York’s performances are percussive, energetic and highly dynamic, with colorful costumes and lively choreography.

In addition to NYC’s most powerful dance groups and bands, Hook Arts Media is proud to bring out talented pre-professional youth groups to perform on the Red Hook Fest mainstage. Over the years, Red Hook Fest audiences have seen NYC’s most powerful young artists perform ballet, Mexican folk dance, hip hop, step, modern dance, jazz, and more. Follow Hook Arts Media on social media and subscribe to our email list to be among the first to find out which stunning youth groups will grace the Red Hook Fest stage in 2019!

Red Hook Fest Over the Years

Red Hook’s biggest annual festival has delivered loads of summer fun and outdoor family-friendly entertainment for more than 25 years. Held in one of Red Hook’s most scenic parks with breathtaking views of NY tourist attractions, like The Statue of Liberty, Red Hook Fest is one of Brooklyn’s most scenic annual traditions. With beloved annual traditions, like kayaking in the harbor, free barbecue, DJ-led dance party, and fantastic performances by pre-professional youth groups, Red Hook Fest is a can’t miss tradition for New Yorkers and tourists alike.